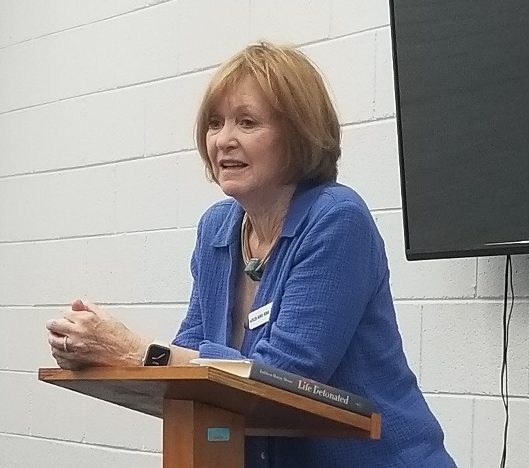 Kathleen Murray Moran, author, teacher, and tireless advocate for families of fallen police officers shared an unimaginable true story with a standing-room-only crowd at Harper Library. Moran is the co-founder of Survivors of the Shield (SOS) and told the story of her raw, somber, emotional journey that concludes with hope and a measure of forgiveness.

As a young mother, her life was detonated on September 11, 1976 when her husband Brain Murray, an NYPD bomb disposal expert, was killed defusing a bomb Croatian freedom fighters placed in a Grand Central Station locker before hijacking TWA flight 355 from La Guardia airport. She detailed her childhood in the Bronx, her journey out of poverty, and her determination to raise her two young sons after Brian’s death.

Meet the Author attendees couldn’t help but feel the emotions of that day Brian was killed.  A riveted audience understood why when reading her book, “your thoughts never leave the page.” Her personal story of healing detailed how she rebuilt her life, launched a lawsuit against the city of New York to find out the real reason the bomb exploded, and at the same time began a relationship through letters with one of the hijackers.

This is a story of resilience in the face of senseless tragedy.  Moran’s struggle to seek answers and overcome her grief empowered her to fight for vital legislation that provides support and assistance to the spouses and children of New York City police officers killed in the line of duty.

And if her story wasn’t inspiring enough, she donates proceeds from the sale of the book to the homeless.

Life Detonated is available from the Brunswick County Public Library in hardcover and audiobook.