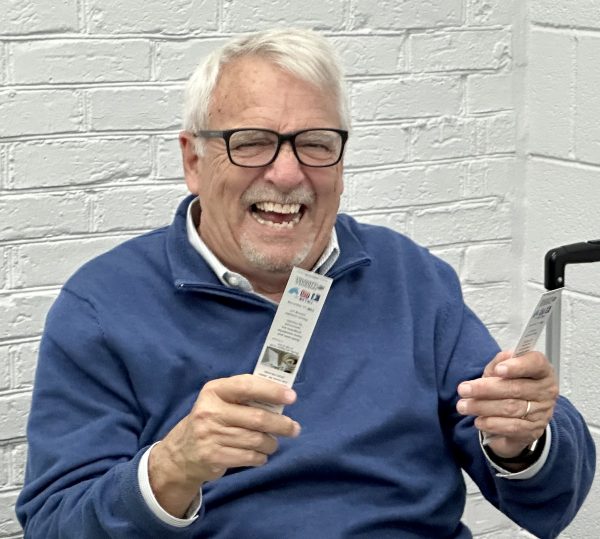 Parlaying his background in training and stress management and his infectious good humor, author Stephen Patterson regaled a roomful of Harper Library “Meet the Author” attendees ready to leave their cares behind and enjoy a good laugh.

We had Stephen’s long-suffering GPS to thank for his on-time arrival, as his innate navigational abilities made the journey from Chapin South Carolina to Southport a bit more of an odyssey.

Stephen began writing over a decade ago, publishing his first book, Better Living Through Laughter (An Attitude to Live By), after leveraging the editorial skills of his son’s then-girlfriend (whose subsequent departure from the scene was presumably for other reasons.)

His next book, The King’s Last Ride, imagines the behind-the-scenes story of the death and surprisingly rapid burial of Elvis Presley. This fictional account had its origins in a chance meeting with a reporter investigating the curious circumstances surrounding Elvis’ death.

In introducing his latest book, Let’s Go If You’re Going, Stephen asked whether any of us had dreamt of running away to join a traveling fair. None of us had, but that did not detract from his readings from the book or our immersion in the late 1960s when national events began rapidly eroding our collective innocence. The book centers on young men exploring the forbidden fruits of the fair’s notorious “hoochie coochie” shows, and their clash with a local preacher intent on making a name for himself by fighting these “roving sin factories.”

Viewed from the lens of today where youthful innocence is long forgotten, Let’s Go If You’re Going shows what happens when “our perceptions lead us astray.” Humor and the ability to laugh at ourselves and our woes may be the glue that holds us together as we navigate a world of disinformation, deception, and despair.

If that world is wearing on you, one of StephenPatterson’s books is just what you need.