Experiencing a ‘Sense of Place’ in Meeting the Author 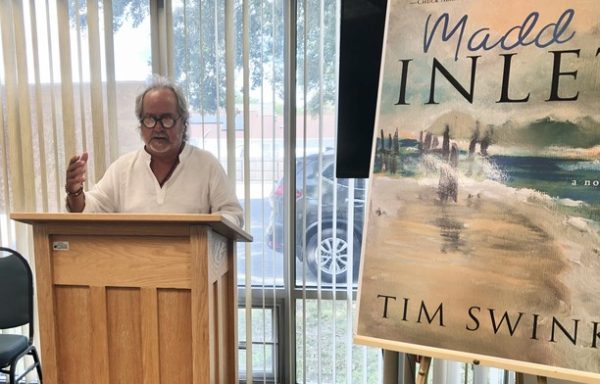 Greensboro, North Carolina, author Tim Swink addressed a capacity crowd at Barbee Library on Oak Island this week to talk about his life, books and craft. Introduced by FOLSOI’s Programs Co-Chair, Patty Langer, Tim described his background working first for newspapers (including USA Today) and periodicals, then working as an investigator for attorneys. Tim drew upon his experiences and family legacy in tobacco farming for his first book published in 2013, Curing Time, which wove together themes of historical fiction, suspense, and one man’s struggles with the challenges of modern life. Curing Time is being reissued by Tim’s current publisher and he is working on a sequel, Where the Flowers Bloomed.

Tim’s second book, Madd Inlet, came out in March 2022 and is set in Sunset Beach (and features beautiful cover art by his wife, Renee.)  Madd Inlet tells the story of a young man hiding out to avoid the Vietnam war draft only to find himself drawn into a more personal battle arising from a land dispute. Having grown up spending time – and getting into mischief – on Sunset Beach, Tim has plenty of material to give his books local flavor.

Tim describes his novel writing approach as unplanned, building out the plot organically as it evolves in his imagination. In the tradition of Southern writers such as Eudora Welty and William Faulkner, Tim emphasizes a “sense of place” connecting the plot and characters with their surroundings and with the forces – seen and unseen – in their world.

Attendees had their questions answered and purchased personally autographed copies of Madd Inlet. Some in the audience even suggested that their book club might make Madd Inlet one of their upcoming selections. For those with a story inside them to tell, Tim advised that they look to their imaginations and write it for themselves, a process that ensures authenticity.