Want to Learn to Play Chess? Come to the Library! 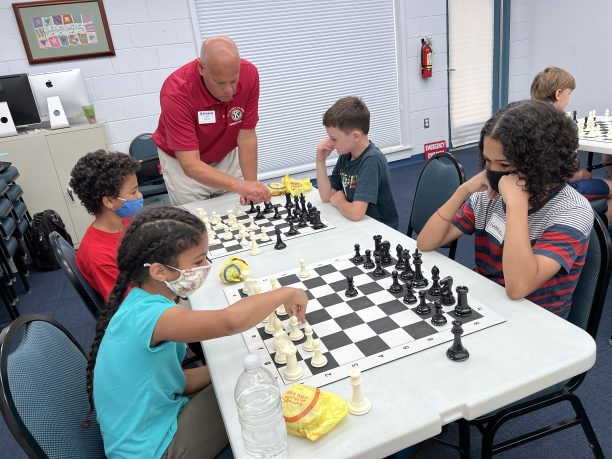 The room buzzed with enthusiasm before the program even started as participants of all ages came to Harper Library for Jeff Mount’s beginner chess class. I was one of them, representing the oldest student who had never before played chess. Truthfully, I was a bit intimidated since most of the participants were elementary and middle school students who had some level of understanding of the game. Its been more decades than I care to admit since I was in middle school.

Mr. Mount welcomed all of us with a breakfast of Egg McMuffins and stories of former students who grew to love the game. He and Sophia Baldwin, one of his former chess students, walked us through the basics and played blitz chess (more commonly known as speed chess) to show us how the game is played. The group took to it quickly while my head was spinning just trying to remember the names of the pieces and what moves they could make.

We broke up into pairs to play and fortunately I was paired with Caleb, a thirteen-year-old with the patience of a saint. He let me use my cheat sheet documenting the rules I had just learned. Even with Sophia by my side coaching me along, I struggled but made it through two games with Caleb. We each won a game and learned a lot while sharing laughs and having great fun.

Don’t miss the next chess class offered at Barbee Library, 8200 Oak Island Drive, Oak Island, on Tuesday, August 23 from 2 p.m. to 3 p.m.  At least I’ve got a few weeks to practice! I’m going to practice my “checkmate” announcement, too, just in case I need it!

Here’s the video from the class, courtesy of the State Port Pilot: