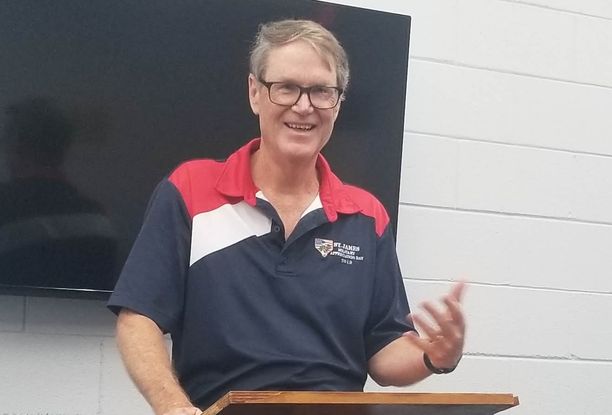 The audience was “at attention” when Southport author Col (Ret.) Dobie McArthur was the guest speaker for FOLSOI’s Meet the Author program at Harper Library in mid-May. He was there to talk about his life, military career, and a thrilling series of Civil War books he’s writing—including the latest, American Insurrection.

Writer of political thrillers, McArthur spoke about how his background has provided some pretty great material for his books.  A Marine who also attended the US Naval Academy, McArthur earned a master’s degree in Middle Eastern Studies from Oxford University and held many positions in his years of service, including Foreign Area Officer specializing in the Middle East.  After his military career, McArthur divided his time between industry jobs and political positions, serving on the staff for Republican senators Arlen Specter and Richard Lugar, and as a political appointee at the Pentagon during the George W. Bush administration.

A lifelong fan of authors Isaac Asimov and George Orwell, McArthur said he wanted to write modern, thought-provoking books that would compel readers to think about what we, as a society, should be doing to meet the difficult challenges we face today.  Once he realized he could draw upon his own experiences in the military and political fields to concoct realistic stories and characters, he started writing in 2018.  To date, he has completed four books in what will be a set of eight books called the “Civil War Series.”  His most recently published novel is American Insurrectionand he is currently working on his fifth book, New Leadership, due out this fall.  McArthur said that each book has a two-word title chosen so that the first letter of the second word, when all eight books are completed, will spell out “civil war!”  How cool is that?!

McArthur answered questions from his audience, including how his wife (who was in attendance) felt when his main character’s wife was killed off!  To a room full of laughter, he explained that she was okay with it, but made him promise not to kill off the dog!