Long Overdue, We Finally Get to ‘Meet the Authors’ 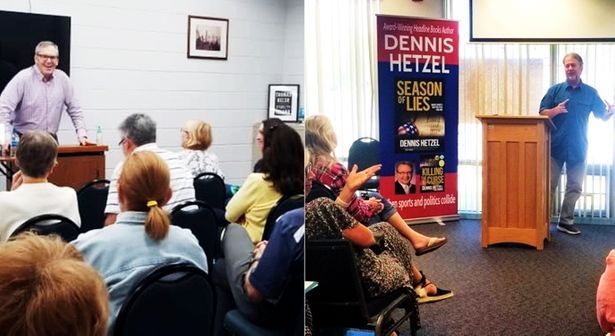 Dennis Hetzel (above, right) a resident of Holden Beach with a distinguished career in journalism, entertained a full room at Barbee Library last week with a “Meet the Author” account of his transition into writing suspense novels. It was a welcome return for this popular, but Covid-delayed series.

Hetzel spoke about the inspiration for all three of his novels, the most recent of which is set right here in Brunswick County.  Azalea Bluff is a UFO mystery based on a radio show written by the late Ed Galloway, a legendary radio personality from Charlotte, who reached out to the author requesting that he turn his program into a novel.  While doing his research – which included interviews with Brunswick County Sheriff Ingram – Hetzel said he was surprised by how of the material was based on facts!  He told us about UFO sightings documented by the US government, a program called “Project Paperclip” that had US military hunting for Nazi scientists after WWII, and records of German aircraft technology that far outpaced the rest of the world in the 1940s. Neat stuff!!!

The author went on to speak about the fine line between fact and fiction that authors must straddle.

“Things don’t have to be true, but they at least have to at least be plausible or you will lose your reader,” Hetzel said.

He then read the first chapter of Azalea Bluff aloud, with great animation, which had everyone hooked.

Hetzel answered questions from the audience about his writing style, publishing process, an achieving balance – did I mention he’s also in a rock band called MoSun?  Look for them at Second Wind and American Fish Co. this summer.

The Doctor Was In!

Just a few days later, St. James resident and well-known orthopedic surgeon Dr. Tom Kelso (above, left) was the guest author at Harper Library.  This Meet the Author program was standing room only, with more than 30 people crammed into the room, many of whom were patients coming to witness a very different side of their doctor.

Dr. Kelso’s path to writing novels started at an early age, although he did not write fiction until much later in life.  He joked that when he read a book written by his college buddy a few years ago, he realized “if he can do this, I can do it just as well or even better!”

Dr. Kelso has published two medical thrillers featuring trauma surgeon Dr. Mark Thurman that display the author’s interest in cutting-edge medical technology.  As an author, Kelso draws on his experiences as a veterinary science post-grad working with thoroughbred race horses, his nine years working as a Naval medical officer – including four spent with Seal Team Six – and 10 years as a hospital trauma surgeon in Springfield, Missouri.  Clearly this author has a lot of material to mine for his stories.

Kelso’s gave us the inside scoop on his latest book, which he expects to publish this summer, called Stability Island.  The story involves a Russian nuclear scientist who discovers a new element with the potential to change the way the planet is powered, and the evil forces out to stop that.

While answering audience questions, Dr. Kelso deftly explained complicated scientific concepts in laymen’s terms (thank you!) and shared his insights on how self-published authors negotiate through turf wars between Amazon and Barnes & Noble.

At the end of Kelso’s talk, attendees were surprised to see Southport Mayor Joe Hatem, who came to support his good friend the doctor, and his “Friends of the Library” too.