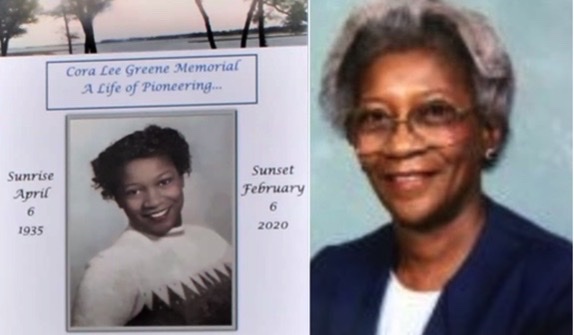 Kicking off its Black History Month celebrations, the Southport Historical Society this week hosted an online presentation by Board Member Donnie Joyner on The Life and Times of Ms. Cora Lee Greene. Southport native and 1954 Brunswick County Training (BCT) school graduate, Ms. Lee leveraged her training and experience as a registered nurse to effect positive change throughout and beyond Brunswick County.

Working as a nurse in Norfolk Virginia and later at Dosher Memorial Hospital in Southport, Cora Lee encountered segregation and prejudice. For example, a man whose wife was giving birth at Dosher told Cora Lee that he did want her in the labor room because of her race. She told him that she was there to do her job and could do it as well as any of the other nurses. One day, she said, the man would apologize to her–which he eventually did.

By her hard work, patience, and undaunted positivity, Cora Lee changed other minds, and soon became a respected leader in the community. She became the first woman member of the Brunswick County Community College Board of Trustees and championed many humanitarian causes. Cora Lee opened doors for minorities and those in need, and her generosity of spirit and persistence continues to resound through the community.

In 2005, Cora Lee Greene was awarded The Order of the Long Leaf Pine, the North Carolina Governor’s highest honor “for persons who have made significant contributions to the state and their communities through their exemplary service and exceptional accomplishments.” Donnie Joyner’s presentation concluded with memorial tributes to Cora Lee, including a jubilant musical send-off from her loving and admiring friends at that Zion Hill Missionary Baptist Church.

For those who missed this wonderful presentation, go here to the recording.