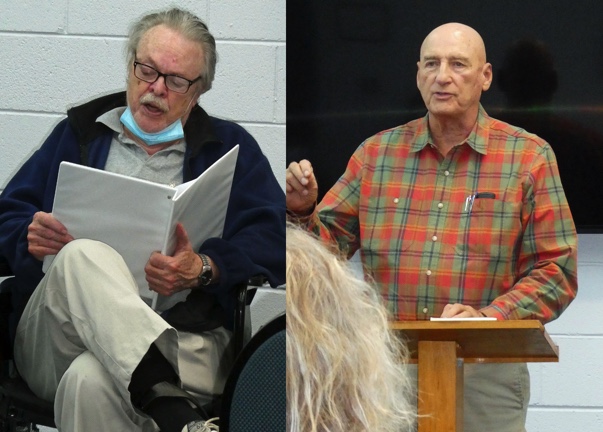 While FOLSOI had successfully live-streamed two MTAs during the pandemic, the writers, patrons and Harper Library staff were more than “thrilled” to enjoy the live experience.

First up was Woodruff, a writer of legal page-turners whose books all feature the character of criminal attorney Lucious White. He opened by reading an excerpt from one of his personal favorites, The Medallion [go to Alan Woodruff’s books at Amazon].  Set in the Honduras with a plot that centers around drug lords, arms trafficking, and government secrets, the gruff-voiced author had everyone on the edge of their seats and eager to hear more.

Alan, a trial attorney with a Harvard PhD and advanced degrees in chemical engineering, administration and law, prides himself on writing realistic courtroom scenes, drawing on his 20-plus years as a trial lawyer and his experiences as a consultant for government agencies.

He explained that he starts by outlining to build a realistic plot, timeframe and setting, and then fills in with details and descriptions. Other writers, he said, prefer to work in a more free-flowing manner and are known as “pantsers”–writing by the seat of their pants! But that means more work in the editing process, explained Woodruff, who teaches creative writing at Brunswick Community College.

Author Henry Hack, a Former Nassau County detective with a terrific New York accent and rugged demeanor, followed Woodruff and declared that he is an unapologetic “pantser!”  The two authors shared a good rapport, alternately teasing and complimenting each other throughout the hour-long event.

Hack began as a self-published author, but now works with a publisher and offered an interesting interpretation of the pros and cons of both.

He also talked about the real-life experiences he draws on for his unique story ideas, based on 22 years as a police detective in Nassau County, New York, where he reached the rank of lieutenant. Eventually commander of the Scientific Investigation Bureau, Hack became a frequent expert witness for blood, narcotics and trace evidence.

He read an excerpt from his latest book, Absolution, and once again the audience was left wanting more.  Both authors had their books available for sale and signing afterward.

Look for more information on upcoming Meet the Author programs this Spring.