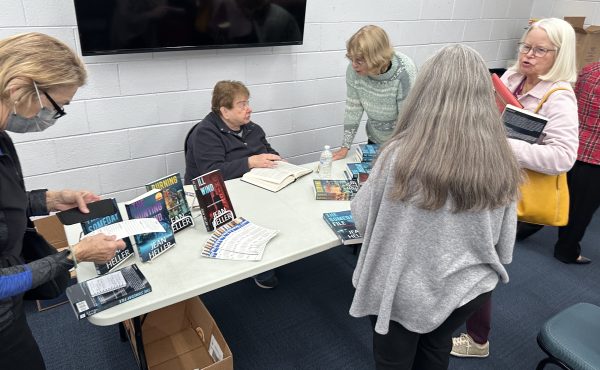 Authors are often advised to “write what you know.” When bestselling author Jean Heller addressed a capacity crowd at Southport’s Harper Library on December 5th,  “Meet the Author” attendees learned that her knowledge, accumulated through decades of experience as an investigative journalist, could fuel an entire library’s worth of books.

Working for major press outlets, Jean loved her job until she didn’t, as the profession strayed from its rigid ethical roots to allow, even encourage, journalists to inject their opinions and agendas into their work.  After 30 years in the profession, Jean stepped away.

It was investigative journalism’s loss because Jean Heller was one of the best, treading fearlessly into the dark corners of our world. In 1972, while working for the Associated Press, she broke the story of the infamous Tuskegee Experiment, in which medical treatment was withheld from hundreds of African American men with syphilis so that their agonizing deaths could be studied. Jean’s reporting helped end this unspeakable atrocity, the repercussions of which lasted for generations.

Jean’s first novel, Maximum Impact, published in 1993, deals with a deadly plane crash and the subsequent cover-up. In 1995, she released Handyman, featuring a serial killer terrorizing the Tampa area.

Jean generously entertained audience questions on her writing process (she loves doing the research for her books), whether her books are considered “thrillers” or “mysteries” (somewhere in between), and her background growing up (she yearned to be an astronomer.) Now settled in her “forever” home in Southport (her 30th home since graduate school), Jean continues work on her next book.