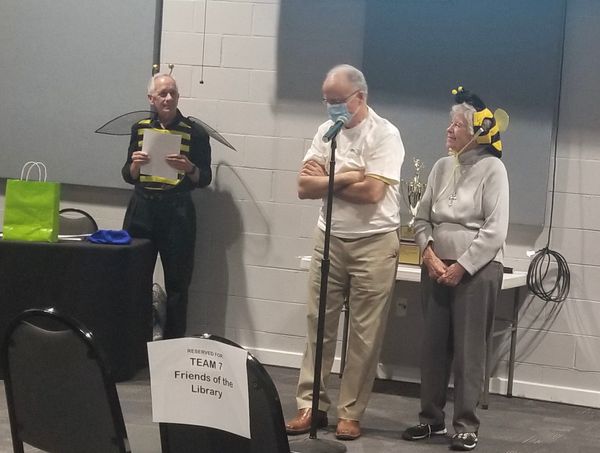 Bibliophiles, grammarians, brainiacs, and word geeks, some in costume and some in official police uniform paired up for the 31st annual Adult Spelling Bee and silent auction event sponsored by the Brunswick County Literacy Council and held at the Odell Williamson Auditorium.

Master of ceremonies Jeff Mount kicked off the fun-filled evening and introduced the eleven teams who were sponsored by local businesses, churches, book clubs, nonprofits and service organizations—including from the Brunswick County Sheriff’s Office and Brunswick Community College.

Among the teams were two-time champions, Bill Chase and Anne Bailey (pictured above), who were sponsored by the Friends of the Library. Their cheering section was hoping for a three-peat as they spelled their way past some pretty tough competition from such other teams as “The Spellcasters,” “Word Witches,” and “Badges & Brains.”

“This event, although filled with competition, fun, and laughter has a serious purpose,” said Melissa Warren, executive director of the Brunswick County Literacy Council. “It directly supports the Council’s mission to improve lives by providing literacy skills for adults 16 and older. Seventeen percent of adults living in Brunswick County lack basic literacy skills. The ability to read and write is an open door for life-transforming opportunities. When we help adults improve their literacy skills, we’re giving them a chance to reach their full potential and, in turn, strengthen their families and our communities.”

After a brief intermission, spectators heard inspiring success stories from Sandra McNeil and Irina Zaslavskya, both current BCLC students. Sandra now reads to her granddaughter who is starting kindergarten, and Irina, who only spoke Russian when she arrived in the United States, beautifully expressed her appreciation to BCLC in English.

Pronouncer and expediter Stephen Burns kept the competition moving along through rounds of increasing difficulty as each team had 15 seconds to spell their word.  Our Friends of the Library champs, Bill and Anne, impressively spelled their way through Round 5. Who knew there were two r’s in sarsaparilla?

The competition was intense with the final two teams, Kerry Cantwell and Paul Mills, English professors from Brunswick Community College, and Kathy Gilchrist and Tony Iannotta from Seaside United Methodist Church, spelling their way to Round 11. In an amazing display of spelling proficiency, Kerry and Paul won the competition correctly spelling pterodactyl. Can’t wait for next year’s spelling bee!