Moms Get Love from League of Women Voters 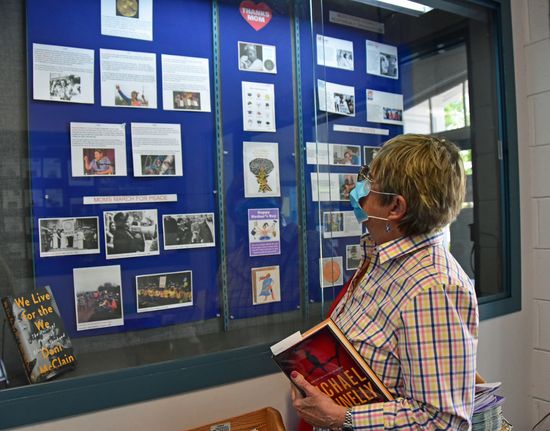 Thanks to The League of Women Voters of Lower Cape Fear, Harper Library’s two display cabinets are currently showcasing a wonderful photographic tribute to Moms and their service to their country. Moms who ran for public office, were appointed to public office, won the Nobel Peace Prize, were heads of state, and those who were the supportive, encouraging mothers of men whose public service changed the nation. The women go as far back as Eleanor Roosevelt and are as recent as Amy Coney Barrett.

The library staff has also assembled several books about mothers and displayed them on the table in front of the check-out counter. There are so many with intriguing titles, like “I Lost Everything in the Post-Natal Depression,” by the queen of funny – Erma Bombeck. And “Are You My Mother?” by P.D. Eastman, a very cute child’s book about a bird who looks for his mother among the animals. Then there is “Momzillas,” and “Mothers Need Time-Outs Too.” There are books that make us laugh, and some that are instructional, some are fiction, and several will be popular with kids.

So the next time you visit Harper Library you might want to budget an extra 15 or 20 minutes to look at the inspiring, well captioned League of Women Voters photographic tribute, and pick out a book or two about mothers and motherhood. [In photo, Judy Steffens stops to look at the League’s display on her way out of the library.]