There Once Was a Day Called Limerick (Wed., May 12) 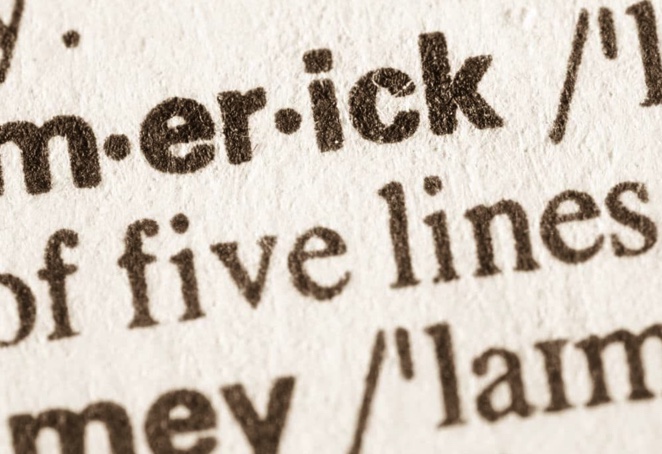 There once was a man named Ed Lear
Who wrote poems that would bring you to tears
Not lovely nor eloquent
But fun and irreverent
We now celebrate limericks each year!

National Limerick Day, held every year on May 12, pays homage to the man who made the short poems widespread — Edward Lear. Lear was an English poet who is known for his nonsense-style, often writing with made-up words.

With just five lines, the first two rhyming with the fifth line, and third and fourth lines rhyming together, limericks are quick, funny poems.

Lear is widely credited as being the person to popularize the limerick in the early nineteenth century.  A form of lighthearted, farcical poetry, limericks represented a sharp contrast to the stern rigidity of the Victorian era.

Lear was a well-known illustrator, musician, author, poet and artist in his time.  Early in life, Lear’s recognition as a gifted artist led to a job at the London Zoological Society as an “ornithological draughtsman,” where he became renowned for his beautifully detailed bird illustrations. Many compared his paintings to that of the famous naturalist and contemporary, John James Audubon.  At one point, the great poet Alfred, Lord Tennyson commissioned Lear to illustrate and compose musical settings for some of his poems, which Lear would describe as a personal career highlight.

Lear’s talent was so prolific that it caught the attention of many wealthy individuals who paid him to paint for their private collections, including Edward Stanley, the 13th Earl of Derby, who became Lear’s patron for many years.

Lear lived with the Stanley family at Knowsley Hall in Lancashire for several years, where in addition to painting the Earl’s considerable animal menagerie, he frequently wrote silly poems and musical prose to entertain the Earl’s children. It turned out that adults loved Lear’s ditties just as much as the children did!

While many of his limericks allowed children to view stern adults in a silly manner, their themes often inferred mockery of societal rules and norms of the time.  The popularity of his nonsensical rhymes led to the publication of Lear’s first compilation of limericks in 1846, entitled “A Book of Nonsense.”  Here’s is a classic from that volume:

There was an Old Man with a beard,
Who said, “It is just as I feared!
Two Owls and a Hen,
four Larks and a Wren,
Have all built their nests in my beard.

Edward Lear suffered from several serious health issues that started in boyhood, including frequent Grand Mal epileptic seizures, bronchitis, severe asthma, and partial blindness later in life. According to journals that he kept, Lear was terribly ashamed of his illnesses and felt guilt for the hardships they caused. He suffered boughs of depression, which he referred to as “the morbids,” that followed him throughout his life.

According to biographical information, Lear used his absurd verbal playfulness as a form of escapism. Through limericks, he was able to mask life’s hardships and cruelties, pains and frustrations, both personal and societal.

There are a few books in the Brunswick County library system that contain limericks, or similar forms of poetry:

For children, the following books are in our system:

For more book recommendations and to learn more about the life and work of Edward Lear, go to www.poetryfoundations.org/poets/edward-lear.