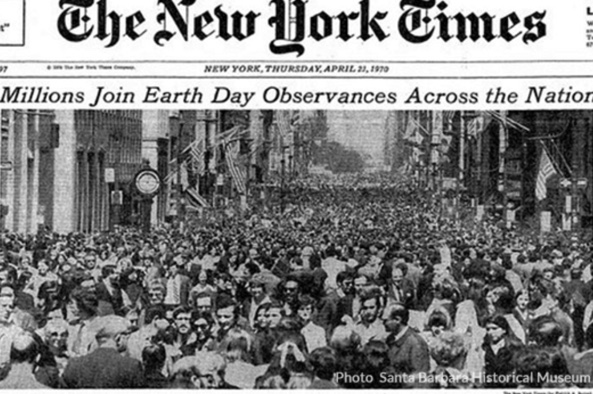 Thursday, April 22 will mark the 51st Earth Day Celebration, an annual event held around the world to demonstrate support for environmental protection   The theme for 2021 is “Restore Our Earth” with an emphasis on reducing climate change.

Earth Day originated in 1970 when Senator Gaylord Nelson (D-Wisconsin), building on the success of 1960s protest movements and growing public concern over pollution, organized the event as a “teach-in” to bring attention to the harmful effects of pollution and to educate people about the importance of caring for our environment.  Before that time, there had been very little government regulation of chemical usage and discharge, and very little public awareness of its dire effects on humans.

Since the start of the industrial revolution, chemicals and sludge were routinely discharged into rivers and waterways, toxic fumes spewed from manufacturing silos, automobiles guzzled gas and spewed harmful exhaust into the air, litter blanketed roadways and shorelines, and a booming plastics industry produced mountains of non-biodegradable garbage in landfills across the country.

In 1962, environmentalist Rachel Carson published “The Silent Spring,” a book that brought attention to the dangers of DDT and other pesticides that were being applied without restraint throughout the American countryside.  Ms. Carson argued that while the intent of pesticide application was good and perhaps even necessary to eradicate insects that destroyed crops and spread disease, the indiscriminate use of certain toxic chemicals was harmful, causing fish kills, death to large bird populations, and cancer in humans.

READ IT: “The Silent Spring” by Rachel Carson is available through the Brunswick County Library system.

Although many people in government and the chemical industry tried to project Ms. Carson as an extremist, her book quickly became a best seller as public opinion shifted to her side, backed by scientific study.  In the years following its publication, conversation and debate around the content of “Silent Spring” spurred a growing public awareness of the human impact on our environment.

In 1969, a massive fire on the Cuyahoga River in Cleveland brought further attention to the issue of chemical waste disposal and the pollution of America’s waterways.  People were shocked and horrified to see a waterway so heavily polluted that it could sustain a fire five stories high!

The following year, Sen. Nelson, an ardent environmentalist, hired a Harvard graduate student named Dennis Hayes to help organize the first Earth Day event.  Hayes recruited an army of student volunteers across the country to work alongside Nelson’s staff, and on April 22, 1970, Earth Day rallies were held in Philadelphia, Chicago, Los Angeles, NYC, and most other major US cities. Celebrities including Paul Newman, Ali McGraw, and singer Pete Seeger joined in the cause, which drew over 20 million people to the streets!

The event was so successful that President Nixon authorized the formation of the Environmental Protection Agency (EPA) in December of 1970, tasking the new agency with protecting human health and safeguarding the natural environment   Earth Day became a celebrated annual event, and eventually was credited as the impetus for several important pieces of legislation passed in the 1970s, including the Clean Air Act, the Endangered Species Act, and the Water Quality Improvement Act.

In 1990, Senator Nelson and Hayes made Earth Day a global event, and today over a billion people participate in events held in 140 countries.  Momentum from the international movement led to the ratification of the Paris Agreement in 2016, a binding international treaty negotiated at the United Nations Convention on Climate Change.  To date, 191 nations have signed the agreement, pledging to limit global warming by reducing greenhouse gases.  (The United States withdrew from the agreement in 2020 but rejoined in 2021.)

Today, EarthDay.org has become an international organization that seeks to drive meaningful action for our planet in the areas of climate action, science & education, people and communities, conservation and restoration, and plastics and pollution.