Meanwhile, in Southport: The History of African American Education 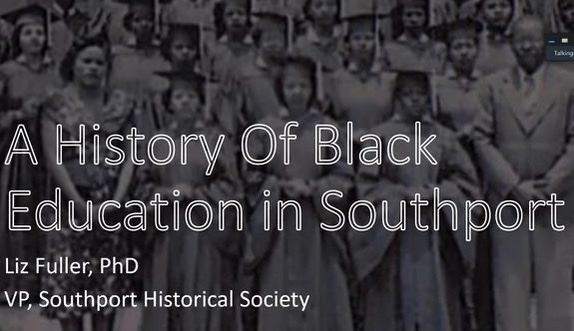 Securing a decent and equal education has been a far-too-long, far-too-hard struggle for Blacks in America, even in Brunswick County. In the latest Max and Sarah Williams Life Long Learners program hosted by Barbee Library, Liz Fuller of the Southport Historical Society shared the challenges of African American education in Southport.

She described how, in 1870, Southport (known then as Smithville) had 1,600 residents, 40% of whom were African American. North Carolina had no public schools; the private schools had been shut down during the Civil War. An estimated 95% of North Carolina’s Black population was illiterate. Prior to Emancipation, it had been illegal to teach or provide educational materials to Blacks. Once the Civil War ended in 1865, freedmen schools for Blacks were established, and private schools for whites were opened (or reopened), offering educational opportunities.

The dedication of local African Americans and philanthropists (Black and white) led to the establishment of the Brunswick County Training School in 1921. Coming after the violent 1919 “Red Summer” which saw extensive white-on-Black violence including many lynchings, the prospect of educating Blacks was not universally embraced. By focusing on perceptions of vocational rather than academic educational offerings, these fears were allayed.

In the first of several setbacks, the newly completed Brunswick County Training School burned to the ground, and the bank holding the insurance policy went bankrupt. Undeterred, the school’s benefactors and local fundraisers began anew.

Obtaining textbooks entailed risky night meetings in the woods where white principals gave discarded books to the intrepid Alvin Caviness, the beloved Principal of the Brunswick County Training School from 1932 to 1970.

When Brown v. Board of Education determined that “separate but equal” educational facilities were not constitutional, North Carolina established a workaround in which families could choose which school their child would attend. If even one Black child attended a white school, it was considered “integrated.”

Understandably, many Blacks remained at Brunswick County Training School, even rebuilding the gymnasium themselves. Thus, in 1969 when the largely white Southport High School burned down, Principal Caviness welcomed displaced students, telling his students, “They’re coming to our house now. Let’s treat them right.”

The prowess of Brunswick County Training School’s football and basketball programs helped facilitate school integration. So did the realization by formerly separate races that they had more in common than what divided them, a realization that could ease racial tensions now as it did then.

The Max and Sarah Williams Life Long Learners program “The African American Experience,” hosted by Barbee Library, continues on Thursday mornings at 10 am via Zoom. To register, contact the library at 910-278-4283.