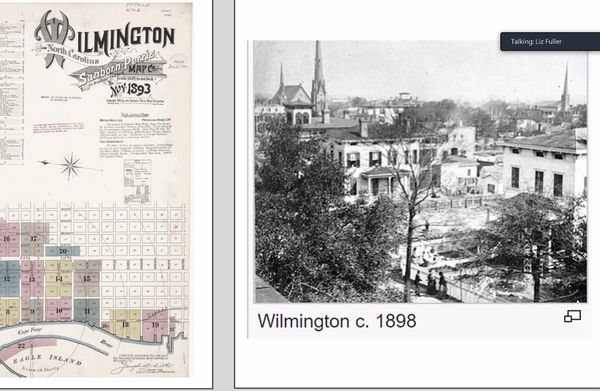 History, it has been said, is written by the winners. What happens, though, when there are no real winners? That was the case for the 1898 Wilmington North Carolina uprising or coup or race riot or massacre… depending on who was relaying the history.

This week, Liz Fuller of the Southport Historical Society addressed the Max and Sarah Williams Life Long Learners group that has been exploring the African American experience to discuss the politics and history surrounding this tragic event.

We first need to understand the political parties that were vying for control at the time. Southern Democrats were the conservative, monied “old guard,” including Confederate war veterans trying to maintain the former status quo. Republicans were the party of Lincoln, progressive, including Unionists and freed slaves. The Populist party appealed to farmers and rural white people. The Fusionist party was the first inter-racial political alliance between the Republicans and the Populists.

After the Civil War, Wilmington was one of North Carolina’s preeminent cities, a thriving port with a robust Black population including Black aldermen and legislators, and skilled craftsmen who built many Wilmington landmarks, including Thalian Hall. Wilmington was a beacon of hope to former enslaved people, but a source of increasing outrage and tension to whites who viewed their way of life as imperiled.

For many years, the prevailing account of the 1898 Wilmington uprising was that of avowed white supremacist Mayor Alfred Moore Waddell who had incited such violence with fiery speeches saying such things as, “We will never surrender to a ragged raffle of negroes, even if we have to choke the Cape Fear River with their carcasses.” White citizens were ready to implement the four-part plan to steal the election, lead a riot, stage a coup, and banish the opposition from power forever.

Six hundred men showed up at the Wilmington court house in response to Waddell’s “White Man’s Declaration of Independence.” Fortified with hundreds more, this white supremacist force began their rampage, setting fire to The Daily Record, a Black-owned printing press.

The ensuing carnage is well documented, but had not been put into proper context until the Wilmington Race Riot Commission’s report in 2006 that confirmed that the riot had been planned by wealthy and powerful white leaders.

Emboldened by the “success” of their actions, these men implemented more Draconian measures to crush the Black vote–from impossible literacy tests to segregationist laws. Wilmington still bears the scars of this appalling chapter in the African American experience.

Hosted by Barbee Library, the Max and Sarah Williams Life Long Learners presentation of The African American Experience continues in March, Thursdays at 10 a.m. via Zoom. Call the library at 910-278-4283 to register (leave your name, email address and phone number).