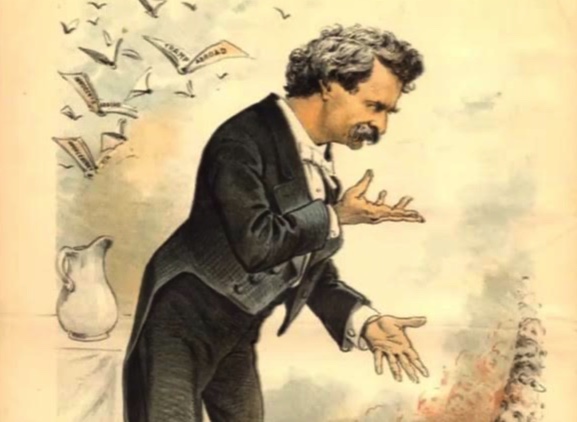 As storm clouds gathered on a November day, 41 participants joined a Barbee Library Zoom meeting to learn about the life and work of Mark Twain. Familiar to many for “Tom Sawyer” and “Huckleberry Finn,” Mark Twain was more than a great writer. He may have been America’s first true celebrity.

Hosted by Stan Shelton and Bill Meiners, the Great Courses session used Mark Twain’s travels to the American West chronicled in “Roughing It” to explore how he leveraged personal setbacks and financial need to hone his public persona.

The program also considered Twain’s works through today’s lens of political correctness, prompting participants to reflect on others who spoke out in polarized times, including Richard Pryor and George Carlin.

Mark Twain did not shy away from controversy; he delighted in making audiences uncomfortable. He used self-deprecating humor to open the minds of his listeners and help them to recognize that we are all fallible, and that we are all in this together.

Self-criticism pervaded Mark Twain’s life. He wrote: “We can secure other people’s approval, if we do right and try hard; but our own is worth a hundred of it, and no way has been found of securing that.”

While the lecture circuit proved lucrative, Mark Twain detested life on the road. Many authors likely share his sentiments as they slog through book tours to launch their life’s work into a cynical world. Maintaining an authentic life is a challenge that Mark Twain would urge us to embrace. As he said: “Always do right. This will gratify some people, and astonish the rest.”