How Southport Beat the Curve in 1918 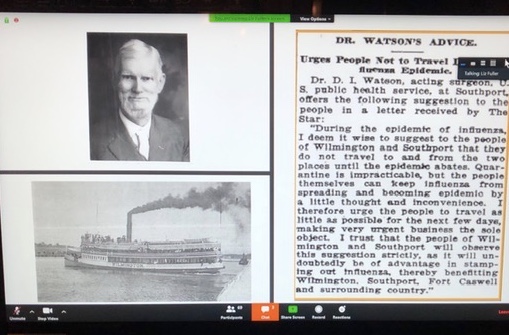 Nearly 100 folks participated – from Coronavirus self-isolation – in this week’s Zoom presentation by Liz Fuller of the Southport Historical Society on “Southport and the 1918 Flu Pandemic.”

Last week, Liz said World War I claimed 16 million lives around the globe. But that awful total was dwarfed, she said in this week’s talk, by the 50 million lives lost to the so-called “Spanish Flu” – a “novel virus” which originated at a military training facility in Haskell County, Kansas in the Spring of 1918.

Doctors at the time did not possess microscopes capable of seeing the virus but knew something drastic was afoot given the sudden deaths of otherwise healthy people within a day or two of infection.

Facilitated by massive rail and ship transports of thousands of troops around the country and across the Atlantic, a global pandemic was soon underway.

And in what could—or should—be a caution to us today in the Coronavirus pandemic, the Spanish Flu actually consisted of three different waves separated by deceptive periods of relief and return to “normal.”

The U.S. government desperately tried to spin the bad news of the Spanish Flu by saying it was merely the “old-fashioned grippe” (or, regular flu) disguised in a foreign name.  Fuller said this was during the time of the American Sedition Act and related laws in nations at war, which resulted in suppression of vital information considered “disparaging”.

Arriving in Wilmington in September 1918, the Spanish Flu soon spread in our direction. Dr. D. I. Watson of Southport astutely asked residents not to travel around the area and to obey what we now call “social distancing” measures.

While 35 people died in Brunswick County, NONE died within the Southport city limits. Across North Carolina, 14,000 deaths were attributed to the pandemic. Later, major investments were made in local hospitals, including one that would later become Dosher Memorial Hospital.

The parallels between “then” and “now” were haunting, and Liz Fuller’s compelling presentation left us with plenty to consider about how Southport can once again rise to the occasion and protect her citizens.