World War I: Southport Steps Up 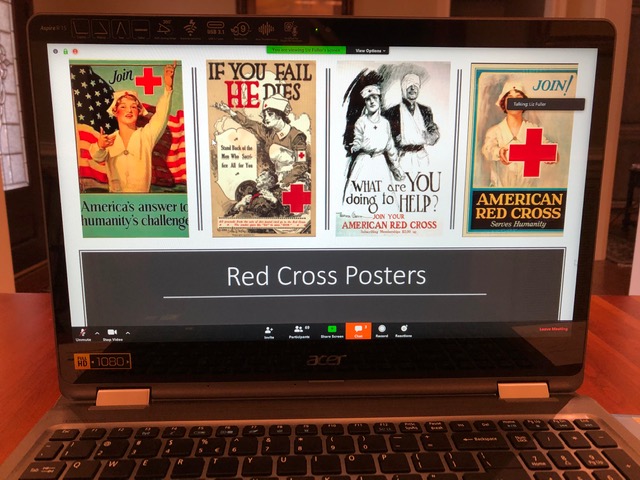 Southport played a vital role in World War I, the “War to End All Wars.” Today, we are once more called upon to fight a global threat, the Coronavirus pandemic, leaving us suddenly isolated from friends, family, jobs, and avocations—circumstances our Cape Fear predecessors also faced 100 years ago.

Those were some of the striking similarities noted in the first “Southport Armchair History” webcast co-presented by the Southport Historical Society and FOLSOI, Thursday, April 2. The series continues for the next four Thursdays from 1-2:15 pm. (Register by email here.)

Nearly 70 participants, many using video conferencing tool “Zoom” for the first time, tuned in as presenter Liz Fuller set a multi-sensory tone for life in Southport.

We could almost smell the fish factories rendering menhaden fish, and catch the odors the shrimp, mussel, oysters, and fish vendors on the waterfront. We could feel the interminably slow passenger train grinding from Southport to Wilmington, and the sore muscles of the fish factory workers. We could hear the “4 Minute Men” hurriedly exhorting folks to buy war bonds, and the pianist at the Amuzu Theater playing mood music for the silent movies. We could shiver in the Fort Caswell tents along with the recruits and taste the palpable dread that they must have felt.

Citizens of Southport served in the cause by growing victory gardens, supporting the Red Cross, and entertaining the troops. Patriotic exhortations also reminded Americans that criticism of our government was punishable by up to 20 years in prison. Ironically, the World War I death toll from combat was eclipsed by deaths from the influenza, a reminder of the price paid by Americans, even in small towns far from the “action”.

This Southport Historical Society series promises more excellent content, and we hope that folks who missed it can access the recorded version. As an aside, it was great to see several of the folks who attended one or more of the FOLSOI “Senior Tech” workshops on this Zoom video event. Together, we’ll get through this.