One Small Step for Kids, One Giant Leap for Education 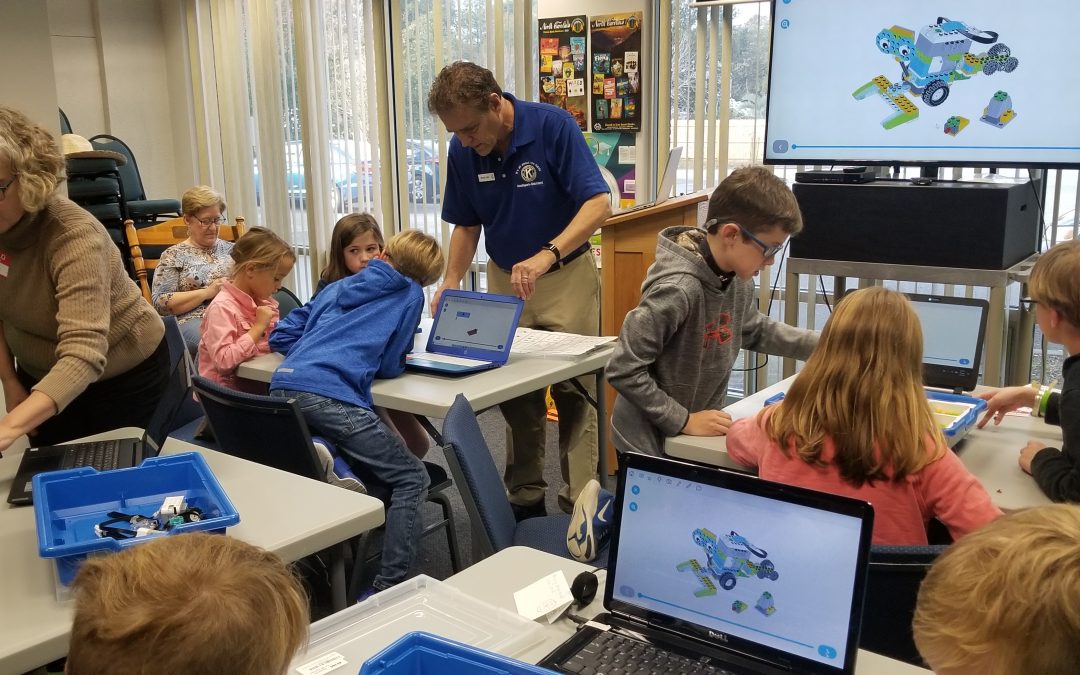 No tricky moon landing was attempted, but Oak Island’s Barbee Library was recently the site of several little Lego lunar rovers traversing some challenging pathways and picking up small objects in the building.

It was all fun, hard work, and hands-on education for nearly a dozen local students in a program called Robotics Lego-We-Do. The imaginative event, hosted by the library, was a collaborative venture between Friends of the Library Southport & Oak Island (FOLSOI), Kiwanis, and Rotary.

Although the class was designed for eight students, the session included 11 students who quickly settled into teams of two or three, each with an adult coach, to build the lunar rover models.

Guiding the students were remarkable adult volunteers who have backgrounds in education and engineering—and a desire to teach a new generation.

Using donated computers and purchased Lego robotics kits, the coaches brought their expertise and enthusiasm to coaching elementary school students in the art and science of assembling and programming small robots.

Collaboration was again the watchword, as students worked effectively in their teams to follow approximately 80 steps in assembling their robots, then learning to program them.

An introductory video set the mood with NASA footage of a rocket launch and payload reaching the lunar surface.

Trial and error allowed students to refine robot operations. Controlled by the laptops via a wireless Bluetooth connection, the robots occasionally zoomed perilously close to (or off) the table edge, necessitating programming edits on the computer touch screens. While a casual observer might see this as “fun” or “play”, it required plenty of critical thinking, hand-to-eye coordination, and teamwork.

The popularity of the Lego-We-Do program was underscored by the number of repeat attendees who had enjoyed one or more previous workshops offered at Barbee and Harper Libraries. It’s a great way for kids to learn new skills, gain confidence, and envision an amazing future.

This year,, FOLSOI hopes to expand their offerings at the libraries to include “Kids Who Code”. This correspondent wouldn’t be surprised if some of these students go on to careers in aerospace or industrial robotic design.