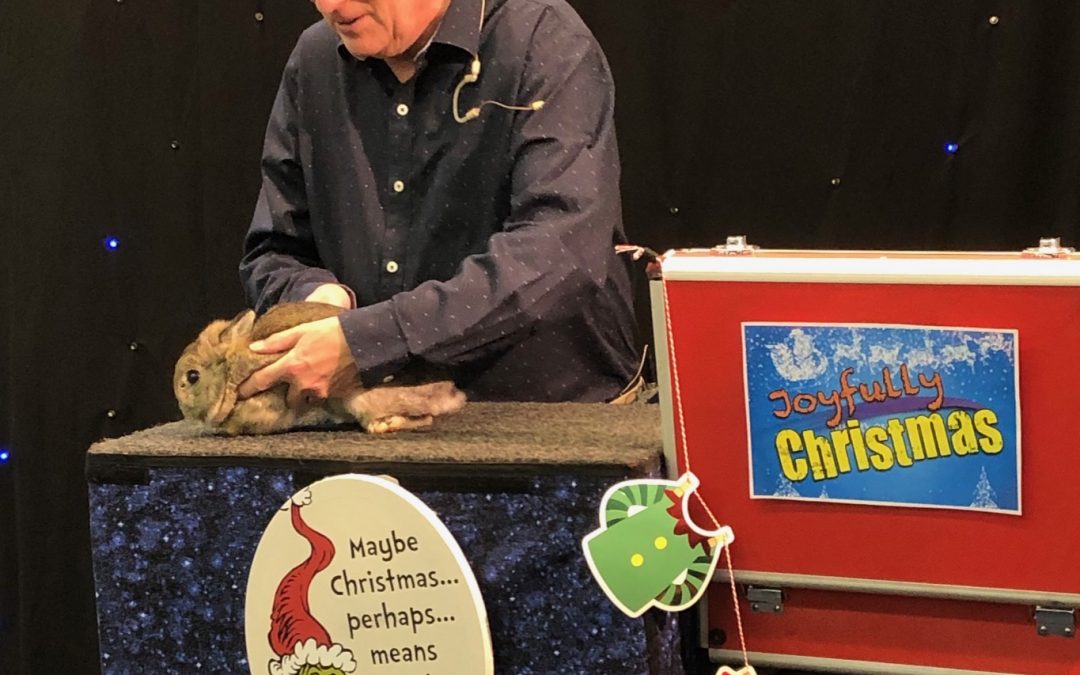 The spirit of Christmas filled Harper Library on Friday, December 20, as “Magical Storyteller” Mark Daniel brought his unique brand of illusion and humor to entertain children and grown-ups alike.

Cynical adults and already world-weary children may have their doubts about magic, jaded as they are by over-the-top special effects and the commercial and political fakery that abounds in the modern world. To them, that “magical” jingle bell from the Polar Express may be just more “humbug”. But for those willing to suspend their disbelief, Mark’s brand of magic may be just the antidote for cynicism.

Simple, silly, and sincere, Mark’s low-tech brand of magic draws us in, urging the children in attendance (and the inner children of the adults present) to grab our winter coats and hats and dash out into the snow, to return to a time of wide-eyed wonder. Yes, we can figure out much of the magic. No, we don’t care. Mark’s merry misdirection is precisely what we need to bring back the joy of Christmas.

We listen, spellbound, to his readings from “How the Grinch Stole Christmas” and other Christmas classics. We’ve heard them before, but watching the kids participating, it seemed as fresh as a new snowfall. Mark even filled the room with a “magical” snowfall. Everyone – kids included – could see that it consisted of confetti blown into a vortex by an electric fan, but they were delighted by the spectacle.

Mark’s performance was non-stop fun, especially when he pulled Kenny the Bunny – a live rabbit – from the magical “Christmas Caboose”. Kenny patiently endured being petted by the kids, as if he too was willing to suspend his disbelief and make this a very special Christmas. Thank you, Mark, for reminding us of the joy we miss in a sometimes cynical world.